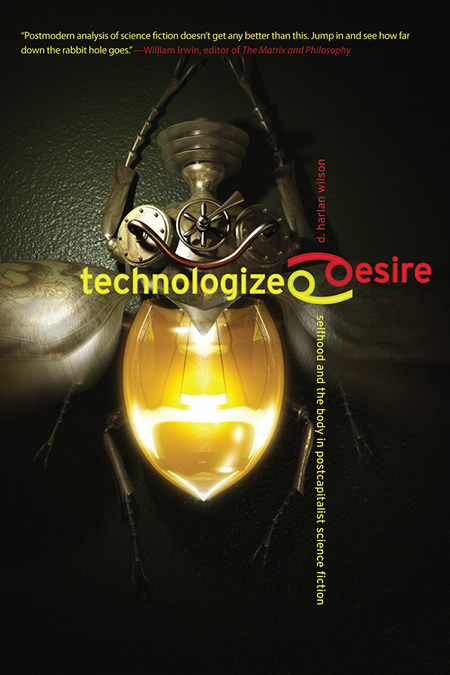 In Technologized Desire, D. Harlan Wilson measures the evolution of the human condition as it has been represented by postcapitalist science fiction, which has consistently represented the body and subjectivity as ultraviolent, pathological phenomena. Operating under the assumption that selfhood is a technology—i.e., a creative projection from the body encompassing everything from language to electronic machinery—Wilson studies the emergence of selfhood in philosophy (Deleuze & Guattari), fiction (William S. Burroughs' cut-up novels and Max Barry's Jennifer Government), and cinema (Army of Darkness, Vanilla Sky, and the Matrix trilogy) in an attempt to portray the schizophrenic rigor of twenty-first century mediatized life. We are obligated by our own pathological unconscious to always choose to be enslaved by capital and its hi-tech arsenal. The universe of consumer-capitalism, Wilson argues, is an illusory prison from which there is no escape—despite the fact that it is illusory.

"A common accompanying theme of postcapitalist science fiction is dystopian post-humanism: a merging of the biological self and technology with disastrous global consequences. Such stories swarm with clones, cyborgs, and virtual realities. These latter stories have a tendency to dehumanize the human, many seeming to strive to answer the question 'What is humanity?' while characters plug or jack or dial into virtual, highly technologized existences. With this backdrop of science fiction, along with that of decades of culture, philosophy, politics, and history as its base, and expanding his science fiction data field to include cinema as the prevailing mass medium for such fiction, prolific fiction and non-fiction author D. Harlan Wilson's Technologized Desire is an ambitious undertaking, analyzing the currents of all these information flows and examining them for patterns and meaning with a keen, postmodern eye." —THE NEW YORK REVIEW OF SCIENCE FICTION

"In Technologized Desire, the cultural pathologies that mark the panic ecstasy and terminal doom of the posthuman condition are powerfully rehearsed in the language of science fiction. Here, images of prosthetic subjects, zombies, cut-ups and armies of the medieval dead actually slip off the pages of literature to become the terminal hauntology of these technologized times. Technologized Desire is nothing less than a brilliant data screen of future memories. Read it well: it's a survival guide for bodies flatlined by the speed of accelerating technology." —ARTHUR KROKER, author of The Postmodern Scene and Panic Encyclopedia

"By and large, his interpretations are right on the money: Wilson's analyses are almost always rich, insightful, and convincing. Thus Crowe's and Raimi's films demonstrate the impossibility of a 'natural' self even while guilefully suggesting the opposite; Burroughs' trilogy advances postcapitalist (i.e., hypercapitalist) 'reality'; and the Wachowskis' Matrix films recapitulate all of this with an eye toward 'the futurological dimension of a postcapitalist dystopia' as well as the history of science fiction itself. In addition, Wilson's key concern—that capitalist critique be added to the otherwise exemplary work begun by Bukatman—constitutes a valuable contribution to recent scholarship on postmodern science fiction." —SCIENCE FICTION STUDIES

"With or without choice, Wilson's technologized subjects explore the possibilities left them through 'science fiction texts that can be read as technocultural phenomena as well as sources that read into the nature of technoculture.' This is the fruitful outcome of Wilson's project—a series of deft and interesting analyses of the ways in which specific sf texts map the position of the technologized self within the postmodern world. I would recommend the book highly to anyone interested in any of the texts under analysis and for those interested in postcapitalism or sf as a proscriptive genre. Although the level of theoretical engagement would make Technologized Desire a difficult text for all but the most advanced graduate students, I could easily see using it in the classroom as a model for graduate students on how to integrate multiple theories by multiple theorists into a persuasive argument." —JOURNAL OF THE FANTASTIC IN THE ARTS

"Wilson mobilizes a pantheon of twentieth century commentators from Freud to Benjamin, to Baudrillard and Lacan, to Jameson and Zizek, to, finally, Deleuze and Guattari—'poet laureates of technocapitalism.' Despite being a deceptively concise book, Technologized Desire is a more than worthy addition to sf scholarship. It can appeal both to those deeply entrenched in the discourses of capitalist posthumanity and to beginners whom the book will send outward to other critical texts invoked by Wilson." —EXTRAPOLATION

"Technologized Desire proves itself to be a rich addition to the growing canon of 21st-century critical theory and literary criticism. Wilson is an author who expresses a clear concern for the future; his book is an urgent text of keen observation and wide-reaching social commentary that warrants nothing less than a careful, thoughtful read." —RAIN TAXI

"Wilson’s Technologized Desire is a fantastic book. One of the finest theoretical examinations in the field, it is also eminently readable and highly incisive. With this, Wilson has written a major work, one that will stand out (and above) in science fiction studies. Both great fun and wonderfully intelligent. Highly recommended." —GARY HOPPENSTAND, author of Pop Culture: The Basics and emeritus editor-in-chief of Journal of Popular Culture

"Wilson's text serves not only as a well-informed addition to science fiction criticism and theory, but also as a critique of postmodem society and the direction it is headed. Utilizing examples from postcapitalist films, novels, and comic books, Wilson provides a dynamic analysis of science fiction as a way to view postmodern capitalism and its effects on society and individuals." —FEMSPEC

"Postmodern SF, Wilson suggests, has recovered from the panic of cyberpunk and begun to treat the human body as a commodity-self that can free itself from the technological. Ultimately, Wilson's book is a quick read and could serve as an entry into SF and postmodern fiction and film." —JOURNAL OF THE MIDWEST MODERN LANGUAGE ASSOCIATION

"Describing an impressively wide arc, from high-toned cultural theory to cyberpunk fiction to techno-centered cinema, Wilson advances his theory that 'the only choice available to the postmodern subject is rooted in a dependency on the ultraviolent schizophrenic production of the commodity-self.' Technologized Desire is a bright, brazen, evocative reading of technology, the body, and the art that is inaccurately labeled science 'fiction'." —HAROLD JAFFE, author of Beyond the Techno-Cave and Induced Coma

"As time goes on, will humanity become less human? Technologized Desire is a discussion of science fiction and its relation to the future of mankind and its relationship to technology. Analyzing the works of many writers, D. Harlan Wilson brings readers some original philosophy about the conclusions we can draw for the future of mankind by simply looking at science fiction. This is an utterly fascinating read that deserves a place in any literary studies collection." —MIDWEST BOOK REVIEW