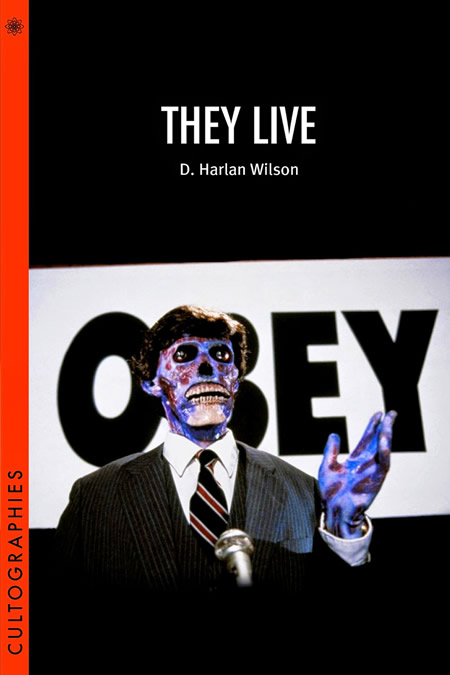 Born from the cultural flamboyance and anxiety of the 1980s, They Live is a hallmark of John Carpenter’s singular canon, combining the aesthetics of multiple genres and leveling an attack against the politics of Reaganism and the Cold War. The decision to cast professional wrestler “Rowdy” Roddy Piper as his protagonist gave Carpenter the additional means to comment on the hypermasculine attitudes and codes indicative of the era. This monograph traces the development of They Live from its comic book roots to its legacy as a cult masterpiece while evaluating the film in light of the paranoid/postmodern theory that came to fruition in the decidedly “Big 80s.” Directed by a reluctant auteur, the film is examined as a complex work of metafiction that calls attention to the nature of cinematic production and reception as well as the dynamics of the cult landscape.

They Live is a cultography published by Wallflower Press, an imprint of Columbia University Press that specializes in books on cinema and the moving image. The CULTOGRAPHIES series provide a comprehensive introduction to films that have attained the coveted status of cult classic, focusing on their particular appeal, the ways in which they have been conceived, constructed and received, and their place in the broader popular cultural landscape.

"Wilson reminds us of Reaganism, the excess of the 1980s (on Wall Street, in fashion, and more), the contemporary muscular cinema of Arnold Schwarzenegger and Sylvester Stallone, and the only-just-emerging plight of economically disenfranchised working classes to demonstrate how and why this film connected with its audience on such a passionate level. Wilson’s broad ideological and historical overview is supported by a number of insightful close readings of certain scenes, especially the infamous fight scene in the alley, and Wilson astutely observes that 'the film’s major themes of race, gender, sexuality and violence converge at this coordinate of stupid(ly) prolonged aggression' whose disruptive excess 'jars us awake, as it were, because it breaks the ontological laws the rest of the film obeys.' Wilson ultimately concludes that the film is a failure, however, because it overwhelmingly 'reinforces rather than subverts the myth of gender construction' that it seeks to interrogate. This fine book achieves a lot in its roughly 100 pages, conveying a nuanced understanding of both the film and its 1980s cultural moment." —SCIENCE FICTION STUDIES

"Wilson gets what makes They Live live. With all the virtuosity of 'Rowdy' Roddy Piper performing an inverted atomic drop, he grapples with the many dimensions of Carpenter's movie. From the critical, political and schizoanalytical to the simulacral and tonsorial, his short book chews bubble gum and kicks ass." —MARK BOULD, author of Science Fiction: A Routledge Guidebook and editor-in-chief of Journal of Science Fiction Film & Television

"This cultography works as an academic-ish text with much to offer students and scholars who have at least an introductory knowledge of cult and/or literary criticism. They Live carves out a niche in cult studies, standing as an example of enthusiastic, informed scholarship. Cult film scholars, especially those working in SF, horror, or Carpenter’s oeuvre, must seek this book out." —SFRA REVIEW

"D. Harlan Wilson's They Live is an ideal contribution to the cultographies project. Written by a critic fully aware of relevant discourses such as wrestling, fan culture, and historical reception past and present, this is a very stimulating and still timely analysis of one of John Carpenter's key films. Highly recommendable on all levels, especially those of enjoyable and informative reading." —TONY WILLIAMS, author of Hearths of Darkness: The Family in American Horror Film and The Cinema of George A. Romero

"Wilson cagily weaves philosophy and sociology into his analysis of the film, couching possible interpretations of the film in genuine science and educational paradigms, while still appreciating the film for what it is, be it cult lunacy or eye-opening wake-up call." —SAN FRANCISCO BOOK REVIEW

"Wilson is a force to be reckoned with. They Live is sharp and academic but not alienating in any way." —SHOCK TOTEM

"A great study of a great film—it not only provides an array of historical contexts for understanding of They Live, but succeeds as an introduction to essential film theory as it relates to cult cinema and kitsch. Very different than Wilson's bizarro fiction, yet reading this book can help to understand the author's thinking about text and reveals his deep affinity for (and critical facility with) the power of counter-cultural narratives." —MICHAEL A. ARNZEN, author of Grave Markings and 100 Jolts

"The book They Live reframes the film They Live through creative, compelling critique. It makes an elegant case, time after time, for taking this film seriously as well as science fiction cult cinema more broadly." —EXTRAPOLATION