Blankety Blank: A Memoir of Vulgaria 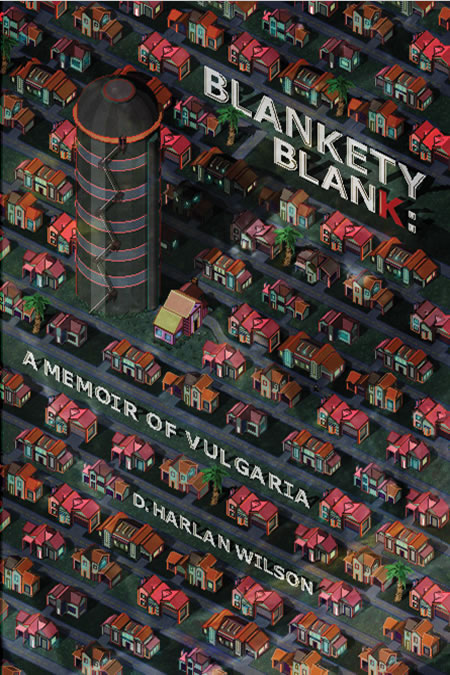 Rutger Van Trout has worse problems than his mundane existence in the all-consuming, all-suppressing Vulgaria of Grand Rapids, Michigan. It’s not that his son might be turning into a werewolf, or that his daughter might be a nymphomaniac. The problem does not lie in his obsession with transforming his middle-class estate into a three-ring barnyard. He doesn’t even mind his wife’s (possibly) haunted skeleton or the freak-of-the-week superheroes and window-jumpers populating his neighborhood. The complication has invaded his community in the form of a new breed of serial killer named Mr. Blankety Blank, who stalks from house to house throughout the Vulgaria leaving a bloodbath that would make Jack the Ripper himself blush.

"With three offbeat story collections and the indescribably madcap Dr. Identity to his credit, Wilson has been duly anointed as speculative fiction’s most unpredictable stylist. Here he flouts all novelistic conventions and propriety in recounting the misdeeds of a serial killer known only by a name written in blood on the walls of his victims’ manicured homes—Blankety Blank. In the mid-twenty-first century, the American landscape has morphed from suburbia into 'vulgaria,' featuring neighborhoods replete with shopping malls and oversized McMansions. Quiggle Estates resident Rutger Van Trout just wants to enjoy his newly built silo in peace, without the added distractions of a nymphomaniac daughter, a werewolf-obsessed son, and a wife haunted by her own skeleton. Then Blankety Blank leaves his trail of blood across the vulgaria, and it’s up to Rutger and Quiggle Estates’ odd assortment of faux superheroes to save everyone. Wilson sprinkles his rapid-fire narrative with glib aphorisms, absurdist pseudo-historical tidbits, and outlandish digressions that leave a reader breathless. Although this isn’t everyone’s cup, iconoclasts will relish every word." —BOOKLIST

"'Destroy time so that chaos may be ordered' was the instruction more than half a century ago of Mailer's The Man Who Studied Yoga and D. Harlan Wilson has taken that advice seriously; here is a novel which implodes and conflates autobiography, biography, history, quasi-history, alternate history and Occam's Safety Razor in a fashion which I find utterly original and utterly discommoding. The exquisite tilt of this novel runs us all off the board and on. Its originality is a weapon—firing at that bullseye on time." —BARRY N. MALZBERG, author of Beyond Apollo and Galaxies

"This comedy of menace, this spooky Kabuki, is never comfortable to inhabit but is as enjoyable as Krazy Kat just the same. The author indulges himself to the hilt and denies himself nothing." —RAIN TAXI

"If you had a time machine and could secure the living brains of James Thurber and Andre Breton ripped untimely from their skulls, run them through a juicer, then mainline the blended liquid neurons, you might become a writer like D. Harlan Wilson. In fact, I know with certainty that this is how he actually got his start. As evidenced by his new 'Memoir of Vulgaria,' Blankety Blank, we are facing a writer who can evoke howls of pity and tears of laughter on the same page, and generally within the same sentence. In this multimedia novel, suburban inanity and insanity are depicted in loving and intimate depth, resulting in a furiously animated canvas equal parts Bosch and Tex Avery. Imagine an episode of The Simpsons scripted by Robert Coover and Donald Barthelme, then directed by Michel Gondry, and you won't be far off the mark. If this be 'interstitial' fiction, then it's a case of the interstices expanding like a galaxy to overwhelm whatever bland shores once flanked them." —PAUL DI FILIPPO, author of The Steampunk Trilogy and Cosmocopia

"Blankety Blank is both vulgar and vulva—a masterful DJ mix of the sounds and sights of avant-pop, avant-porn, critifiction, and post-cyberpunk sensibilities. Mixing the academic with the asylum (i.e., academentia), Blankety Blank shoots forth ficto-history, the post-essay, and celebrity reality TV from the barrell of its Magnum Opus. Indeed, D. Harlan Wilson holds the Avant-Prof Chair vacated by Lance Olsen, briefly held by Mark Amerika, and passed up by David Foster Wallace. A fine promotion, I say, with the possibility of tenure for ten years. Consider, please, if you will, what Jean Baudrillard's ghost channeled to me via Channel 3: 'Tenure is better than manure!' Translation: There's a lot of shit being published these days, but this tasty novel ain't crap. It's cake. So, to quote Marie Antoinette, eat it!" —MICHAEL HEMMINGSON, author of The Dirty Realism Duo and Judas Payne

"Be not embarrassed to laugh out loud at this nasty book. Wilson has reinvented the genre of demonic sci-fi slapstick. Nothing close to it since the unwritten Portnow's Restraint. Intelligent, wicked, erudite, maniacal. What a talent. And this is the first ever cross-species collaboration. The pages penned by his companionable ape are achingly close to humanoid. Read this book and bask in the energy of a living imagination." —STEVE KATZ, author of Swanny's Ways and Antonello's Lion

"This is the fifth work of fiction from Wilson, a nearly unclassifiable fabulist/satirist/ bizarro/post-postmodern/speculative writer and literature professor whose titles include The Kafka Effekt and Dr. Identity. Take an existential dive into the near-future’s 'irreality' before the author sells out to Hollywood." —FOREWORD MAGAZINE

"In Blankety Blank, fact and fiction don’t so much blur as they collide like lovesick Sumos fired at each other from cartoon cannons, resulting in a pseudo-biographical romp interspersed with fictional histories, strange quotes, haikus, and plain ludicrously fun happenings." —FRACTAL MATTER

"Blankety Blank has its roots in a more advanced version of our suburbia, but above ground this is one weird tree. At times it’s part Desperate Housewives—suburban drama, parties and wicked rumor mill—and other times it’s dark and brutal commentary, or complete bizzarro-fueled randomness." —WORD PRESS

"Wilson leads you head-on into a nightmarish, confusing, yet outrageously funny world, using his razor-sharp wit and gift for the written word to keep you enthralled—and almost hopelessly addicted—to this book until the very last page." —NVF MAGAZINE

"The book reads like Dali attampting an exercise in a Zen sort of living-in-the-moment with an ADHD Alex from A Clockwork Orange." —SUSURRUS MAGAZINE

"This book reminded me of the TV show Seinfeld—quirky characters, interesting events, but at the end of the day, really a show about nothing. If you are the type of reader who can open your mind to alternate histories, worlds where absurdity becomes reality, and stories that know no limits, I’d encourage you to give Wilson’s work a try. Whether you wind up loving it or hating it, the experience of reading him once is well worth the price of admission." —DARK SCRIBE MAGAZINE

"This disturbing read is a breakthrough work of fiction that deserves a spotlight on the literary landscape as one of the best works of experimental writing of the year, if not ever. Wilson's purpose, I think, is trying to reveal that there is no such thing as a coherent story in the first place and that history is a fiction, and that that’s where the horror always lies, because we can’t escape these fictions, these truths, this stuff called language. Despite its persistent intellectalizing this remains a genuine horror story because, much like Danielewski’s House of Leaves, it begs the question of its own capacity to capture something much larger and much more sinister than itself in language and narrative. This is what Freud meant by 'the return of the repressed.' Somewhere, somehow, the id is unlatched within this masterful work of historiography, and that’s what gives this Bizarro memoir its own unique and uncanny sense of horror." —MICHAEL A. ARNZEN, author of Grave Markings and 100 Jolts