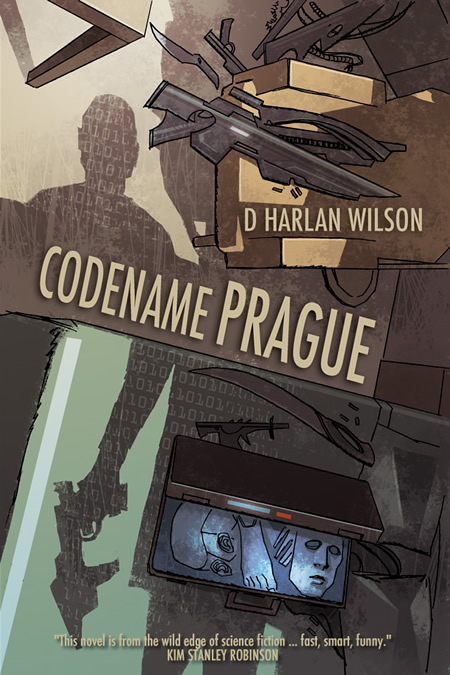 Since he assassinated the Nowhere Man, Vincent Prague hasn't been the same, haunted by the ontological impossibility of the kill. His celebrity status has skyrocketed, however, and everybody wants a piece of him. The MAP (Ministry of Applied Pressure) promotes him to Anvil-in-Chief, the catbird's seat of special agents. Under the so-stupid-it's-genius alias "Vincent Codename Prague," he works a case that leads him to the Former Czech Republik's Prague, a dark cirque du city where androids run wild, femme fatales chronically manhandle him, and a mad chef named Doktor Teufelsdröckh has created a Hitler-Keats-Daikaiju hybrid that would make Frankenstein's monster sing like a Von Trapp. In an over-technologized world of constant reckoning, all Vincent has are his wits, his weapons, and a briefcase full of replaceable extremities to crack a mysterious code that, he soon discovers, resides within himself.

Codename Prague is the second installment in the Scikungfi trilogy and includes an introduction by Steve Aylett.

"This novel is from the wild edge of science fiction, in the tradition of Philip K. Dick's The Three Stigmata of Palmer Eldritch—fast, smart, funny, and full of a scarily plausible vision of just how weird things could get if we take our biological fate into our own hands." —KIM STANLEY ROBINSON, author of 2312 and the Mars trilogy

"This intense mixture of giddy activity, cyberpunk essences, avant fusion and social satire may make your head spin at an accelerated rate. Actual brain damage is unlikely, in most cases." —JOHN SHIRLEY, author of Constantine and Bioshock Rapture

"Who IS this guy?" —PAT CADIGAN, author of Synners and Mindplayers

"I can't form an informed opinion about this novel." —PIERS ANTHONY, author of the Xanth series

"Having assassinated the Nowhere Man, Vincent 'Codename' Prague, master assassin of the Ministry of Applied Pressure (MAP), receives a promotion to Anvil-in-Chief and becomes the target of celebrity hounds. Assigned to a job in Prague (where everyone’s surname is also Prague), Vincent faces Doktor Teufelsdröckh, a mad scientist/chef who has created a monster that rivals Frankenstein. In this second installment of his Scikungfi trilogy (after Dr. Identity), Wilson ups his creative ante with new bursts of stream-of-cyberconsciousness prose to rival Gilbert Sorrentino (Mulligan Stew) and William Burroughs (Naked Lunch). VERDICT: With the cinematic feel of Pulp Fiction and a sound slap at modern culture, this should attract a select audience that appreciates metafiction and pulp action." —LIBRARY JOURNAL

"Reading Wilson's prose is like reading Kafka by strobe light between bouts of drunken unconsciousness. Codename Prague is an experience in cinematic, sf grindhouse literature. The only rule here is: There are no rules. The novel solidifies the claim Wilson has staked on the edge of science fiction where his scikungfi cantina offers quick shots of narrative mescal leaving the reader with a pleasant inebriated buzz followed by a memorable hangover." —FOUNDATION: THE INTERNATIONAL REVIEW OF SCIENCE FICTION

"This stuff would be sickening if its excessive verbiage did not slap the reader silly at every turn." —FOREWORD MAGAZINE

"A work of genius. An entertaining, head-hurting flambouyance." —THE COMPULSIVE READER

"Codename Prague is a mashup of science, insanity, mad scientists, short-tempered special agents, epic Scorsese character battles, a Frankenstein monster that is part Adolf Hitler, part John Keats, and a fistful of ultraviolent chop suey. As you read it, your brain is screaming that none of it should make sense, while at the same time everything is crystal clear. If Wilson were a filmmaker, he'd be in the camp of David Lynch or Alejandro Jodorowsky." —HORROR TALK

"The novel blasts you like the glass that was sandblasted in my old house. It grates against you, sloughing off all your lazy thoughts and unrealised dreams. It wills you to live. It fills you full of something like the joy people vaguely remember to have experienced at least once as a child." —DECOMP MAGAZINE

"The dazzling absurdity, wide-eyed imagery, and wicked humor with which Wilson sends up these and other clichés of science fiction and kung fu movies are more than enough reason to read Codename Prague. However, I think the book’s real brilliance can be found in its playful yet earnest examination of art and the concept of ekphrasis, or the way in which one art form tries to describe another. At the novel’s outset, Wilson playfully defines this term as 'a graphic, ultraviolent depiction of a visual work of reality,' thus drawing, as he did in Peckinpah: An Ultraviolent Romance, a connection between art, violence, and life as lived, which suggests that the lines between all three may be quite fuzzy, indeed. By writing a novel that attempts to describe a movie, Wilson has committed ekphrasis. He also commits it by having his mad scientist splice Hitler and Keats to create a being that can surpass what he sees as the individual strengths of each man. And by giving Prague a fool’s quest that ends with his realization that he holds the code that could take postreal humanity to its next step, Wilson attempts a third form of ekphrasis—that is, to create a version of science fiction, wuxia, and scholarship that illuminates how all three are, more or less, a single art form. The novel’s nonstop action and refreshing lack of pretensions make the book a mind-bending and rewarding read not only for science fiction and kung fu film aficionados, but also for literary critics, Bizarro fans, and readers who are interested in outlandish, experimental science fiction. This is Wilson writing at the top of his game." —THE PEDESTAL MAGAZINE