Dr. Identity, or, Farewell to Plaquedemia 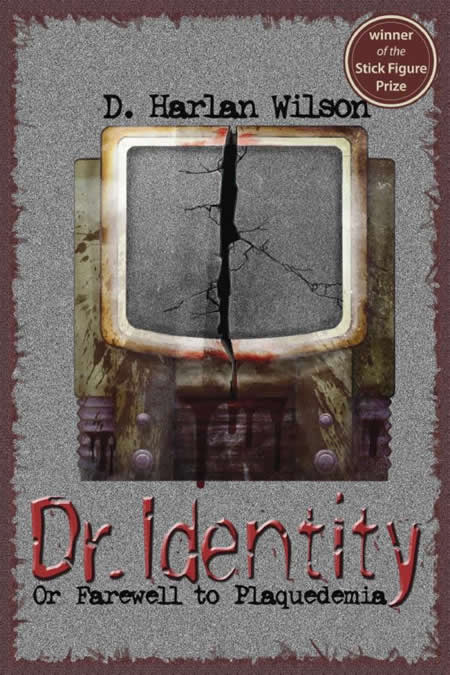 Winner of the Stick Figure Prize for Language & Literature and the Wonderland Book Award for best novel of 2007, Dr. Identity, or, Farewell to Plaquedemia takes place in the irreal, postcapitalist city of Bliptown, where time ticks sideways, artificial bug-eyed monsters punish citizens for consumer-capitalist lethargy, and ultraviolence is as essential as a daily multivitamin. The action begins when the psychotic surrogate-android of a disgruntled English professor accitentally murders a student, then a few facutly and staff members, then a movie star, all of which incites the anger and vengeance of the entire Amerikan nation. Wilson's debut novel marks the first installment of the Scikungfi trilogy.

"Dr. Identity is a rollicking romp through a future so absurd, it can't help but feel real. D. Harlan Wilson shows us everything we know—but wish we didn't—about ourselves." —ROBERT VENDITTI, author of The Surrogates and The Homeland Directive

"Let’s dispense with the usual predictable analogies ('Kafka/Cronenberg-on-laughing-gas'), redundancies ('Phillip K. Dick/William Gibson-on-acid'), or accurate-but-somewhat-obscure references ('the most intense and, in a certain sense, the most significant young prose writer since Mark Leyner and Ben Marcus . . . establishes Wilson as the Steve Katz of the post-everything generation . . . vies with Derek Pell’s The Little Red Book of Adobe LiveMotion for being the funniest book of the new millennium'), and cut to the chase: D Harlan Wilson's hilarious meta-pulp SF novel, Dr. Identity, is a funhouse mirror whose cartoonish distortions continually amaze and amuse—until one realizes that what we’re seeing is a disturbingly accurate vision of ourselves. An instant avant-pop classic by a major new talent. Two surgically-enhanced, stainless-steel thumbs way, way up!" —LARRY MCCAFFERY, editor of Storming the Reality Studio and After Yesterday's Crash

"This book's better'n the bushel full of Benzedrine-spiked donut holes with which Dr. Identity tries to bribe his students into civilized demeanor! Pomo cybertheory never tasted so good or made you fly this high!" —AMERICAN BOOK REVIEW

"A blur-fast caper through a mediated nightmare future which will thankfully be prevented by a series of massive and man-made disasters." —STEVE AYLETT, author of Slaughtermatic and Lint

"Dr. Identity is a ferocious assault on the postmillennial mediascape—an absurdist, steroid-bloated satire of a society hooked on fast food and celebrity." —DAZED & CONFUSED

"Wilson's sardonic, riotously imaginative vision of the future holds a mirror up to our own increasingly chaotic society and makes provocative entertainment." —BOOKLIST

"Only those with a yearning for something different, something truly off-the-wall, something that pushes the boundaries of good taste and what they've come to expect from a novel should take the time to journey through D. Harlan Wilson's Bizarro future world. And those who do will find the experience entertaining and at times maybe even a little enlightening." —CHIZINE

"Dr. Identity is the most surprising novel to come from the small press in some time. Vivid, colourful, coarse, expansive, often hilarious and at times suspiciously pointless, it is an impressive feat and a decadent read, lending itself equally to painstaking analysis and seriously heavy entertainment." —HORRORSCOPE

"Dr. Identity is a work of absurdist fiction that portrays a future so unnerving that it makes Terry Gilliam’s vision of things to come in Brazil seem warm and fuzzy. Certainly, it is even more extreme than the future anticipated by Phillip K. Dick in Do Androids Dream of Electric Sheep? Wilson skewers academia, technology, consumerism, politics, the media, the internet and various other facets of modern society with blood-curdling ferocity." —NECROPSY

"More than a tale of science fiction, like any good science fiction story is, Wilson exposes the truth of why we keep going back to the same old narrative concepts, then destroys that truth by creating something completely original, proving that if the novel is dead, then Dr. Identity is a fully functional zombie." —SUSURRUS MAGAZINE

"At its core, this novel does indeed have a simple, almost pulpy, feel to it. That is only the setup for a book that, in each chapter, in nearly every sentence, contains far-reaching ideas that leave the brain racing to catch up. Wilson creates a whole future world that is as hilarious as it is horrifying. It is this black humor, this sci-fi slapstick, that makes the novel a thoroughly engaging read." —THE HARROW

"Reading Dr. Identity is like wandering a hall of mirrors: each page presents a monstrous but all-too-recognizable vision of our own world." —SKULLRING

"If the ending is a bit flat (though the book is the first of a trilogy), its flatness is the ultimate result of Wilson's entire dystopian vision. Ultimately, Dr. Identity may be a bit exhausting, but you won't be able to put it down, and you'll definitely be thinking about it long after you have." —THE BLOOMSBURY REVIEW

"Dr. Identity doesn’t disappoint at all. You’ll be blinded by morphing zoot-suits, troubled by hippopotamus whips and left stammering by the satire and the spectacle of it all. Brilliant and disturbing in equal measure." —FRACTAL MATTER