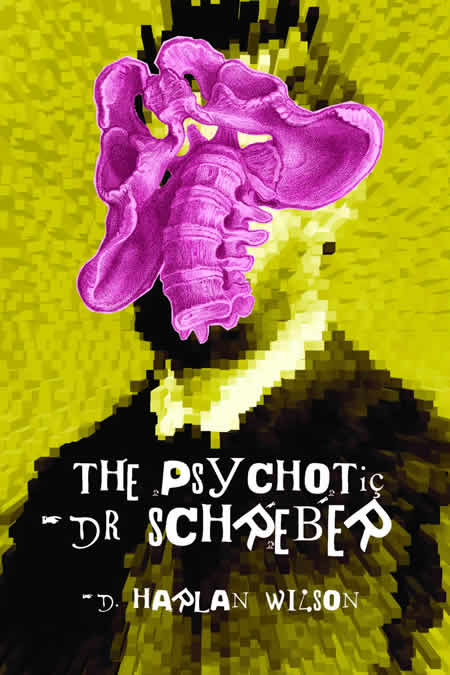 Daniel Paul Schreber (1842-1911) came to prominence as one of history’s most famous madmen in the wake of Sigmund Freud’s “Psychoanalytic Notes Upon an Autobiographical Account of a Case of Paranoia.” Published in 1911, Freud’s case study psychoanalyzes Schreber’s Memoirs of My Nervous Illness, a detailed account of the German Judge’s psychotic breakdowns in which he battled against numerous antagonists, including everything from God and the Devil to his own body and lexicon. Since then, Schreber’s remarkable, uniquely lucid account has leaked from the psychiatric world into literary and popular culture. Postmodern theorists, for instance, have used him as a means to critique consumer-capitalism, explore the dynamics of modernity, and foretell the Nazi ascension, whereas filmmakers such as Alex Proyas have science fictionalized Schreber’s experience, representing him as a product of technologized subjectivity and desire.

Schreberfiktion, an evolved SF—this is the subject of D. Harlan Wilson’s case study, which is at once about, around and beyond Memoirs as well as the many secondary texts it has engendered. As the formerly make-believe aspects of the science fiction genre continue to materialize in the real world, Schreber’s pathology becomes more and more relevant; his imagination and intellect, his anxiety and dread, his solipsism and megalomania point to the pathological unconscious that animates contemporary technological society. Thoroughly researched and transgressive, The Psychotic Dr. Schreber is part speculative (anti)fiction, part (auto)biography, part theatre-of-the-absurd, part writing tutorial, part literary nonsense and criticism. Wilson riffs on and satirizes post-everything, signaling the inevitable death of the reader and rebirth of the real. Science fiction explored the effects of the New in the Next, the Near and, in some cases, the Now. Galvanized by Schreber, this book maps the next stage: the New in the Never.

The Psychotic Dr. Schreber was a finalist for the 2019 Big Other Readers' Choice Award.

"D. Harlan Wilson writes and thinks like no one else, and he has produced one of the most important books in speculative fiction and literary critique in years." —THREE CROWS MAGAZINE

"The Psychotic Dr. Schreber is a nearly indescribable blend of unsettling fiction, historical rumination, and cultural criticism. It’s also an utterly gripping literary work, one that takes bold risks and makes incredible use of an unconventional structure. In revisiting the life of a man best-known for Sigmund Freud’s writing on his case, Wilson details the ways in which Schreber remains relevant today—and traces the way he’s left his mark on everything from medical history to popular culture." —VOL. 1 BROOKLYN

"The Psychotic Dr. Schreber is Ballardian bricolage par excellence, where juxtaposed fragments of theory, biography, and fiction, not to mention satire, finally cohere not only into an affecting portrait of a legendary 'madman' but into a kind of alarming diagnosis of writing, reading, and other 'illnesses.'" —BIG OTHER

"The world is full of shit. D Harlan Wilson is the purgative." —MANCHESTER REVIEW OF BOOKS

"The memoirs of Daniel Paul Schreber’s imploding/projecting ego heralded all of our POST disciplines and eras. The Psychotic Dr. Schreber is their phantasmagoria and last hurrah. What if every social media post were meaningful? Overstimulation unto breakdown! By ratcheting up the Schreber-Effect to throw a fit with our digital era, D. Harlan Wilson has at least—at last!—put the NEW (German pronunciation) into NEVER." —LAURENCE A. RICKELS, author of Nazi Psychoanalysis, Germany: A Science Fiction and The Psycho Records

"Schreber is forever . . . This is a scintillating sexual and scatological fantasia on Schreber’s immortal book, Great Thoughts of a Nervous Patient (the true title), and an uproarious parody on psychosis. Wilson cautions: 'The characters and events in this book are fictitious.' Freud warned: 'It remains for the future to decide whether there is more delusion in my theory that I should like to admit or whether there is more truth in Schreber’s delusion than other people are as yet prepared to believe'—applicable to delusions of Schreber’s interpreters too." —HENRY ZVI LOTHANE, author of In Defense of Schreber: Soul Murder and Psychiatry

"Dementia as a way of being in narrativity and other, lesser modes of existence, duck-and-cover brilliant, dark energy all the way down, D. Harlan Wilson’s The Psychotic Dr. Schreber is a magnificent switching station for all tomorrow’s parties." —LANCE OLSEN, author of Nietzsche’s Kisses and Dreamlives of Debris

"Wilson plays with words in such humorous ways; the book is thoroughly entertaining. Reading it was like putting a puzzle together without the picture as a guide. Some parts were pretty, some were funny, some were delightfully confounding." —POSTCARDS FROM A DYING WORLD

"Judge Schreber has sunbeams in his ass. A solar anus. And rest assured that it works: Judge Schreber feels something, produces something, and is capable of explaining the process theoretically. Something is produced: the effects of a machine, not mere metaphors." —GILLES DELEUZE & FELIX GUATTARI, authors of Anti-Oedipus and A Thousand Plateaus