They Had Goat Heads 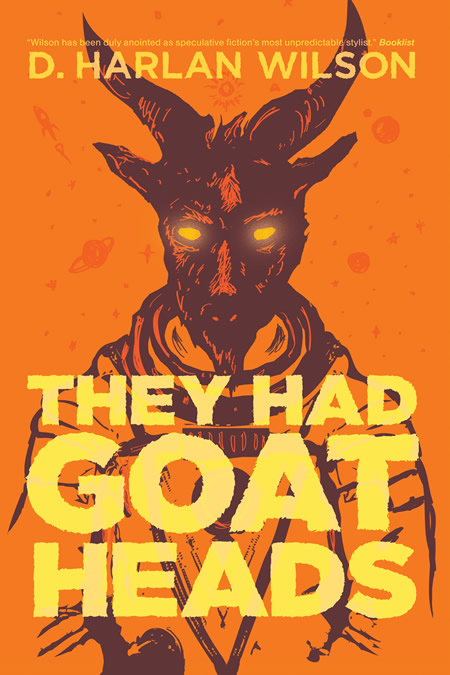 D. Harlan Wilson returns with another ferociously mindbending collection of short fiction. Masked in absurdity, these stories reveal the horrifying and hilarious faces of everyday life. Wilson tells of egg raids, hog rippers, monk spitters, fathers who take their children to pet stores to buy them whales, sociopaths who threaten to clothesline eternity, and the simple act of the story itself becoming a means of repetitive, endless torture. Put on your goat head, hop in your hovercraft, and take a ride with this juggernaut of modern imaginative fiction.

They Had Goat Heads received a nomination for the Wonderland Book Award in the Best Collection category and was a finalist for the Starcherone Innovative Fiction Prize.

"D. Harlan Wilson doesn't just gaze into the abyss. He dives headlong into it, pulling us with him and laughing maniacally all the way down." —TIM WAGGONER, author of Nekropolis and The Winter Box

"Funny, experimental and troubling, this brilliant collection of short stories proves conclusively that D. Harlan Wilson is a maverick author of genius. Some of his stories remind me of Barthelme: they are playful, rhythmic and utilise form in hilariously unexpected ways, and they are eminently quotable. Other tales resemble early Calvino: absurd and light but also pithy and profound. But aside from these comparisons, Wilson is clearly a writer with his own distinctive voice. For years I have grumbled that there is too little quality fiction of this type. Wilson has persuaded me to shut my goddamn mouth." —RHYS HUGHES, author of The Smell of Telescopes and The Young Dictator

"D. Harlan Wilson is a surgical practitioner of the surreal and absurd." —THE BLACK BOOT

"At times troubling, often brilliant, always unpredictable, D. Harlan Wilson’s short story collection, They Had Goat Heads, is an unmitigated marriage of discomfort and delight. These fictions combine elements of humor and horror with hints of madness and a touch of brazen creative brilliance rarely seen in modern stream-of-consciousness stories. Each tale is unpleasantly absurd, from 'Monster Truck,' in which a man welds wheels to his knees and elbows in order to fulfill a dream of becoming a monster truck, to 'The Arrest,' in which seven men attempt to arrest one another. Dark and decidedly disturbing, They Had Goat Heads succeeds where similarly styled stories have predominantly failed. Wilson masks meaning behind the macabre flow of thoughts and words that comprise his unique vision." —HORRORBOUND MAGAZINE

"Here we have a very gifted wordsmith, one who puts as much emphasis on tempo as he does lucidity, and while often Wilson’s stories veer off into the absurd, they never fail to register some sort of response in me. It’s like the written equivalent of an abstract painting, where almost everything is left open to interpretation. It goes against everything I’ve ever learned as a writer, but that’s precisely the point. This is bold, experimental stuff—schizophrenic sci-fi wrapped in nightmare logic." —HORRORVIEW

"They Had Goat Heads is best swallowed whole. A set of individual stories, vignettes, flash fictions and single-sentence narratives, it is by turns menacing, hilarious, eccentric, surreal and downright incomprehensible. It is almost an epic poem of the absurd. Gloriously anarchic, satisfyingly different and immensely rewarding." —THE FUTURE FIRE

"They Had Goat Heads is an assault on pop culture, literature, webspeak, and the reader. It is an excellent read, but it is neither accessible nor inviting. Some stories read as if someone with literary talent and a compulsion-related disorder went on a methamphetamine-fueled Wikipedia binge. It is something like what might have been the product of an Internet age William Burroughs." —INNSMOUTH FREE PRESS

"There’s a Bob Dylan song about umbrellas and crime, darkness and climbing, and the flow of that song, the flow which that song is about—the narrative form of dreams, the logic of their progression, without 'great connections' or 'intricate schemes'—is a useful notion for making sense of what D. Harlan Wilson is doing in this collection of short, strange stories, each its own dream, in a sense, unfolding in the manner of dreams, laced with absurdity and non sequiturs, yet engaging, too, in the specific lineament of genre, of what is now called the 'speculative'." —DECOMP MAGAZINE

"A fascinating take with plenty of humor and thought blended in, They Had Goat Heads is certainly not a collection to be missed." —MIDWEST BOOK REVIEW

"Making your way through any one of the more than three dozen stories presented in this collection is like experiencing a waking dream. Along the way, you’re not really sure what the hell is going on most of the time, but you have to admit that it’s anything but boring. And good luck explaining it to anyone when you’re done. Talk to the wrong psychologist about this kind of stuff and you might end up in a padded room wearing a white jacket that’s just a couple of sizes too small." —CHIZINE

"A percolating amalgam of stories that read like dreams or nightmares, sketches of possibility when all probability tells you to forget your damn logic and run for your very life, and a swirling vortex of terror or perhaps mere wordplay, depending upon the state of mind of the observer observed or an actor who knows not whether he has an audience or if everything all the way back to the cheap seats has drifted, accelerating, over the event horizon, including the reviewer who shall now never make the late edition. Wilson keeps things short and thought-provoking while at the same time nibbling away at the edges of the perception of reality, the reality of perspective, and the illusion of elitism in the face of ambivalence. Read it and refute me if you will." —THE NAUTILUS ENGINE

"The secret of Wilson's exceptional prose is his use of language, stripped down to its emotional center and allowed to do the dirty work of assaulting the reader without the interference of complex plot devices, or explanations for the extraordinary. D. Harlan Wilson delights in turning language to new and exciting uses." —SHROUD MAGAZINE

"D. Harlan Wilson is a true original. Five to ten years from now, you’ll be hearing his name with reference to having pioneered a new brand of absurdist speculative fiction." —HOUSE OF BIZARRO

"This collection of absurd, surreal, irreal, bizarro flash and short fiction is dedicated to the memory of Stanley Ashenbach, who is still alive." —STEVE LOWE, author of Muscle Memory and You Are Sloth