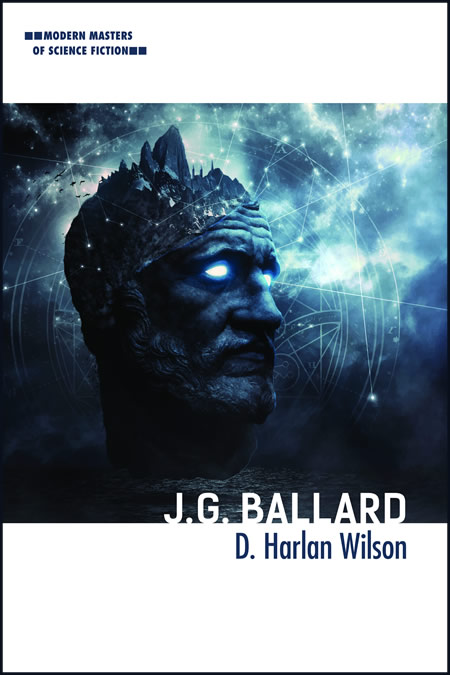 Prophetic short stories and apocalyptic novels like The Crystal World made J.G. Ballard a foundational figure in the British New Wave. Rejecting the science fiction of rockets and aliens, he explored an inner space of humanity informed by psychiatry and biology and shaped by Surrealism. Later in his career, Ballard's combustible plots and violent imagery spurred controversy (even legal action) while his autobiographical 1984 war novel Empire of the Sun brought him fame. D. Harlan Wilson offers the first career-spanning analysis of an author who helped steer SF in new, if startling, directions. Here was a writer committed to moral ambiguity, one who drowned the world and erected a London high-rise doomed to descend into savagery—and coolly picked apart the characters trapped within each story. Wilson also examines Ballard's methods, his influence on cyberpunk, and the ways his fiction operates within the sphere of our larger culture and within SF itself.

A finalist for the 2018 Locus Award in the Best Non-Fiction category, J.G. Ballard is an installment in University of Illinois Press's MODERN MASTERS OF SCIENCE FICTION series.

SF often anticipates the consequences of scientific discoveries. The immense strides made by science since World War II have been matched step by step by writers who gave equal attention to scientific principles, to human imagination, and to the craft of fiction. The respect for SF won by Jules Verne and H. G. Wells was further increased by Isaac Asimov, Arthur C. Clarke, Robert Heinlein, Ursula K. Le Guin, Joanna Russ, and Ray Bradbury. MODERN MASTERS OF SCIENCE FICTION is devoted to books that survey the work of individual authors who continue to inspire and advance the genre.

"A new comprehensive standard. Wilson's insights reach to the furthest ends of J.G. Ballard's bookshelf, complicate easy assumptions about the location of the 'autobiographical' in his novels, and, best of all, assert that if there is a science fiction worth advancing into the twenty-first century, Ballard is at the center, not the periphery, of that project." —JONATHAN LETHEM, author of A Gambler's Anatomy and co-editor of The Exegesis of Philip K. Dick

"The text is elegantly argued, intuitively organized, and sure to be relevant to Ballardian scholars—but will also have value to sf fans who may have been confused by his varied output, or who had lacked the context to fit the titles they liked into his entire body of work. Above all, this is a testament to Ballard's continued relevance. At the time of his death in 2009, social media was only about four years old, but Wilson shows how Ballard could extrapolate from human behavior around the phenomena of film and television—as far back as the 1960s—to anticipate just where we would be today. This has the effect of marking Ballard as well-deserving of the ‘Masters of Science Fiction’ designation. VERDICT: Recommended for all academics and readers of the genre." —LIBRARY JOURNAL

"Wilson, a novelist, turns to criticism in this study, the first full-length monograph to treat Ballard’s entire career. Arguing that Ballard’s emphasis on ‘inner space’ over outer space was perhaps the most influential development of 1960s and ’70s New Wave science fiction, Wilson attempts to shed light on Ballard’s role in the ’megatext’ of the science fiction genre as a whole. He gives background information on Ballard’s childhood growing up in an internment camp in Shanghai during WWII, and sketches out how his work was conceived and how it was received by the larger science fiction community. Separate chapters deal with Ballard’s short fiction, the first four disaster novels, the ‘cultural disaster’ novels such as The Atrocity Exhibition, autobiographical works such as Empire of the Sun, and the author’s final books. Though Ballard’s later work was often branded literary fiction, Wilson argues that Ballard will always remain ‘an icon of science fiction against which other authors measure themselves.’ Scholars and fans of Ballard will find this study comprehensive and stimulating. " —PUBLISHERS WEEKLY

"A model entry in the Modern Masters of Science Fiction series. Comprehensive, intelligent, critically engaged, well-informed, and written in a lively and accessible style. This is probably the single most valuable volume on Ballard for undergraduate and graduate students." —SCIENCE FICTION STUDIES

"You would be hard-pressed to find a more comprehensive academic discourse on Ballard's life and work. I admire Wilson’s encyclopaedic knowledge, his laser inquisitiveness, his deeply fascinating and insightful commentary on more or less everything the man wrote. This is a dense, at times brilliant, microscopically-detailed study." —AMAZING STORIES

"Wilson’s prose and arguments are consistently lucid, charming and inviting in ways that will be of interest to everyone from fans to academics. This is exactly as it should be since Ballard’s extreme metaphors force aberrant elements of late capitalism to collide and meld into a hybridization of high and popular culture. Ballard appeals to both genre devotees and literary dedicators, and Wilson eloquently navigates these demographics. If Ballard is the key to understanding the psychopathologies of everyday life under late capitalism, then Wilson’s book is the key to that key. Illuminating, elegant and enjoyable, J.G. Ballard is a significant contribution to critical studies of the author." —EXTRAPOLATION

"The boldness of Wilson's claim is matched by the force and brevity of its defense. In a mere 161 pages he establishes (and maintains) a remarkably sharp line of argument, at once fascinating and compelling, in a style that, for all its technical precision, is entirely accessible and engaging. The biographical first chapter alone is worth the price of admission, and is easily one of the best summaries going, measure for measure. Wilson has put together an impressive book. There is something intuitive and effortless in his assessment of Ballard's work, and around every corner are oh-my-goodness-how-could-anyone­-have-possibly-missed-that moments of discovery. For fans and critics alike, this is a must-read." —AMERICAN BOOK REVIEW

"J.G. Ballard is an engaging and comprehensive study that marshals a constellation of insights around a single, robust argument. No scholar writing on Ballard in the future will want to be without it. The book would also serve as an ideal introduction to Ballard for undergraduates or others coming to his work for the first time." —THE BRITISH SOCIETY FOR LITERATURE & SCIENCE

"In this wide-ranging and accessible work, D. Harlan Wilson argues that J.G. Ballard is a writer who remained true to science fiction even as he claimed to abandon the genre. With clear-eyed intelligence and a deep understanding of his subject, Wilson builds a compelling case for Ballard as perhaps SF’s most radical innovator." —SIMON SELLARS, editor of Extreme Metaphors: Interviews with J.G. Ballard and publisher of Ballardian.com

"Did J.G. Ballard protest too much? In this engaging work, Wilson makes a compelling case that though Ballard often distanced himself from science fiction his entire oeuvre belongs to the genre, even if Ballard fundamentally changed the genre along the way to include the terrain of inner space and the science-fictionalization of everyday life. A wonderful reading of one of late modernity’s greatest imaginative writers." —DAVID IAN PADDY, author of The Empires of J.G. Ballard: An Imagined Geography

"At last, the very first cohesive overview of the life and work of the fascinating yet enigmatic J.G. Ballard. Wilson sets up the book’s big picture—Ballard always stayed within the science fiction genre—and then proceeds to draw upon much of Ballard’s oeuvre to color in a series of biocritical scenes of the author's life and fiction, from Shanghai to Shepperton, from the early short stories to the culturally apocalyptic final novels. Both interested and academic readers will appreciate the delicate balance Wilson achieves between the breadth of his palate and the depth of each shade, all the while amused by Wilson’s snappy prose and ever-unfolding insights that reveal with appeal in this unique and compelling study of the Seer of Shepperton. What comes after highly recommended?" —RICK MCGRATH, editor of Deep Ends: The J. G. Ballard Anthology and pulbisher of JGBallard.ca

"Wilson argues against critics who propose that Ballard left science fiction behind. The point may be that reality has subsumed science fiction’s brightest dreams and worst nightmares. His account hits all the major themes including Ballard’s surrealistic exploration of unknown worlds in 'inner space.'" —SHEPHERD EXPRESS

"Wilson blazes new scholarly trails here—while nonetheless demonstrating a deft command of the extensive amount of existing exegetical commentaries on Ballard’s fiction—by tracing a multiplicity of affinities between Ballard’s rampantly cited work and the collection of all tropes, memes, and conventions that nominally constitute genre-SF, vast and unwieldy as this megatext may be in practice. This accessible but densely researched book commends itself to the attention of general and novitiate readers as well as long-term scholars of the SF field or postmodern fiction alike, in addition to anyone who desires a concise but comprehensive acquaintanceship with the trajectory of Ballard's career-long themes and concerns." —SFRA REVIEW