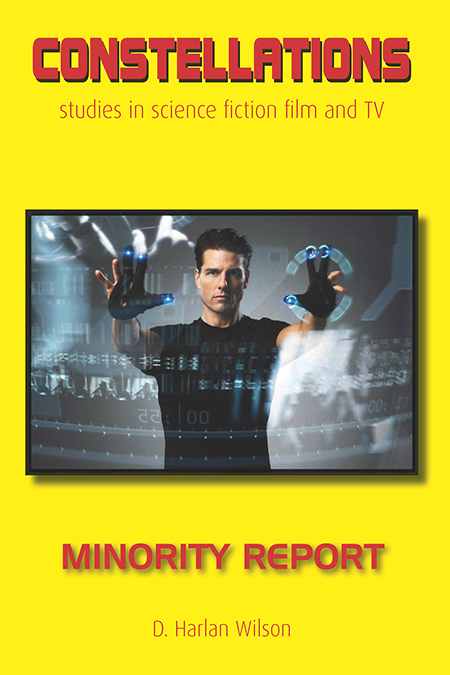 Charting new territory in filmmaking technologies and Steven Spielberg’s oeuvre, Minority Report portrays a dystopian near-future that comments on our increasingly science-fictional world and pays homage to the history of SF cinema. In this comprehensive monograph, D. Harlan Wilson recounts the film's inception, production, reception, and afterlife since its release in 2002 while depicting it as a symptom of contemporary media pathology, post-9/11 paranoia, consumer-capitalist aggression, religious mania, and above all, the screen culture that has come to define the human condition. At the same time, Wilson explores the many self-reflexive flourishes that render the movie a commentary on Spielberg’s style and the precession of the SF genre.

Like the future itself, the imaginative possibilities of science fiction are limitless. And the very development of cinema is inextricably linked to the genre, which, from the earliest depictions of space travel and the robots of silent cinema to the immersive 3D wonders of contemporary blockbusters, has continually pushed at the boundaries. CONSTELLATIONS provides a unique opportunity for writers to share their passion for SF cinema and television in a book-length format. Authors place their chosen title in a variety of contexts—generic, institutional, historic, and social—enabling CONSTELLATIONS to map the terrain of SF film and TV from the past to the present . . . and the future.

"In this erudite and theoretically sophisticated analysis, D. Harlan Wilson contextualizes Minority Report in the history of science fiction and communications technology, with a sensitivity to cultural and political dimensions that draws on established as well as up-to-date scholarship to demonstrate a convincing case for the complexity of what he calls Spielberg’s 'intellectual blockbuster.' A fascinating production case study supports Wilson’s assertion that the movie is 'an exercise in literary cinema' that thoughtfully, entertainingly critiques contemporary screen culture and its implications for identity. Integration of a range of approaches and clearly set-out arguments—in an engaging, precise, at times poetical style—will make the book attractive to college students and instructors while stimulating wider academic debate in science fiction, film, and media studies." —NIGEL MORRIS, author of The Cinema of Steven Spielberg: Empire of Light and editor of The Wiley-Blackwell Companion to Steven Spielberg

"D. Harlan Wilson’s immensely rich analysis of Minority Report takes us on an impressionable journey through the film’s watery allusions, controlling visions, tactile surfaces, and broken horizons. Brilliantly contextualised, superbly illustrated, Wilson places Minority Report within the interface between Spielberg’s New Hollywood oeuvre and the Cruise star vehicle; and in relation to the new forms of surveillance governance that was emerging at the time of its release. Particularly insightful is Wilson’s exploration of religion, and of the radical potential found bubbling away in the film’s political ambivalence. In Wilson’s haptic, gloved hands, the film screams newly into view." —SEAN REDMOND, author of Liquid Space: Science Fiction Film and Television in the Digital Age and editor of Starring Tom Cruise

"In this essential new study, D. Harlan Wilson offers a comprehensive and compelling take on one of Steven Spielberg’s most fascinating, but often underappreciated and undervalued films. Wilson digs deep in Minority Report and illuminates it from numerous perspectives, highlighting its varied cinematic strengths, excavating the depths of its complex and sometimes ambiguous ideologies, and framing it as a film of significance and continued relevance in our age of multitudinous screens and consumerist passivity. Informed equally by close aesthetic analysis, philosophical rumination, and sociological and political analysis, Wilson’s book is an important new contribution to our larger understanding of Steven Spielberg as one of the foremost cinematic artists of the last 50 years and Minority Report as a key film that is both prescient and reflective in its vision of a conflicted future." —JAMES KENDRICK, author of Darkness in the Bliss-Out: A Reconsideration of the Films of Steven Spielberg

"Everything that there is to know about one of Spielberg’s more underrated films can be found in D. Harlan Wilson’s comprehensive work on Minority Report. The highly detailed examination and analysis of literally all aspects of the film—ranging from scripting, design, style, themes, context, influences and much more—makes you appreciate the remarkable detail and skill that was assembled and utilized for the film." —JAMES MAIRATA, author of Steven Spielberg's Style by Stealth