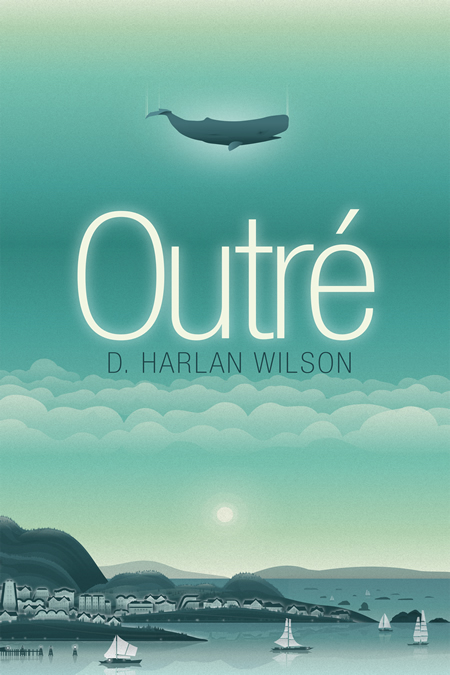 In a future where cinema has usurped reality and there’s nothing special about effects, an aging movie star takes on the role of a lifetime, growing the flesh of an otherworldly kaiju onto his body. At the same time, all of the roles he has played in the past fight for control of his psyche and identity as agents of the media prey upon him. The result is alcoholism, ultraviolence, psychosis . . . and the promise of eternal life.

Combining the aesthetics of Herman Melville’s Moby Dick, J.G. Ballard’s The Atrocity Exhibition, and D. Harlan Wilson’s own experiences as a model, stuntman, standup comic, and stiltwalker, Outré satirizes the contemporary mediascape while depicting a world in which schizophrenia has become a normative condition. Like his revolutionary biographies of Adolf Hitler, Sigmund Freud, and Frederick Douglass, the novel is written in Wilson’s signature “Hörnblowér” prose and reaffirms the critical consensus that he is a genre unto himself.

Outré was a finalist for the 2020 Big Other Readers' Choice Award.

"Wilson’s latest is a wild, surreal modern trip down the rabbit hole. Anyone who enjoys stream-of-consciousness stories, as well as fans of artists Salvador Dalí and René Magritte, will enjoy this hallucinatory dreamscape. Modern cultural elements are supernaturally twisted, while the movie industry is satirized. Logophiles will love the imaginative uses of obscure words." —LIBRARY JOURNAL

"How refreshing! Post-post-post (I could go on and on, but, mercifully, I won’t)-modernism! Outré reads like a cyberpunk Leibnitz on acid. It’s a novel, so you should probably start at the beginning (yet another novel concept); but take a dip anywhere, and you’ll see what I mean. Fun and profound: you’ll think you’re on laughing gas. But watch out: there’s razors hidden in them apples." —JACK DANN, author of The Man Who Melted and The Memory Cathedral

"When you read a D. Harlan Wilson novel, you have to accept that you are not on the same plane of existence with the author and just enjoy that you get a glimpse into the strange place between the man’s ears." —DAVID AGRANOFF, author of Ring of Fire and The Vegan Revolution

"Wilson is a renegade writer of the American old school. He mixes horror and satire, gore and laughs, turning the dial up to eleven on everything." —MANCHESTER REVIEW OF BOOKS

"The world-building in Outré slaps you in the face during its introduction and never shows mercy. D. Harlan Wilson's writing is unmatched in creativity and wit. I must recommend this book to anyone interested in surrealism who can tolerate feeling a little bit dumb at times. Wilson is just too smart for us, and he's proven it with Outré. I can honestly say I've never been through a reading experience as unreal and singular as this." —HEAVY FEATHER REVIEW

"Outré is a funny, strange, insightful, and entertaining look at film and its relation to reality. People new to D. Harlan Wilson's odd and unique style may want to start with some of his short fiction, but this book is well worth reading." —BEN ARZATE, author of Elaine and The Story of the Y

"Reading this book was like falling down a nightmarish and hallucinatory rabbit hole where the known is recognizable but always dressed in disguise. Part philosophy, part horror novel, and part film history, ideas of identity, social norms, mental illness, and ultraviolence (among many others) clash to create a narrative that's simultaneously discombobulating and informative. Better yet, imagine a Salvador Dali painting. Now place yourself in the painting. You have one goal: navigate this surreal landscape. Fans of Kurt Vonnegut, Richard Brautigan, and Philip K. Dick will recognize that Wilson belongs to the same family tree of storytellers. This book is suggested for inclusion in high school, academic, and public libraries." —FOCUS

"Beautifully surreal, Outré is a stylish, satirical rampage through the film industry where, in roughly 120 pages, we ride shotgun to witness one actor’s kaleidoscopic struggle to maintain his identity while enduring the unrelenting horrors of the film industry. To try and define Wilson's latest work is like attempting to make absolute sense of Jodorowsky’s The Holy Mountain or Lynch’s Mulholland Drive; you’re either down for the ride or you’re not—there’s no middle ground here. Cast aside your preconceptions of structure and be willing to get caught in the wave and let it toss you around. You’ll have a hell of a good time if you do." —FORBIDDEN FUTURES