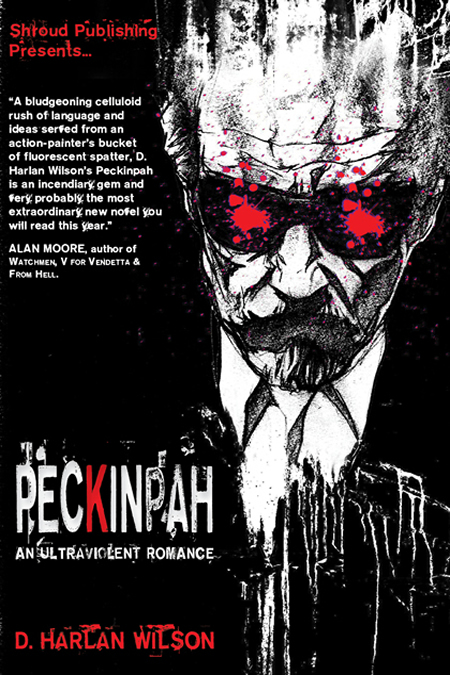 Life in Dreamfield, Indiana, is a daily harangue of pigs, cornfields, pigs, fast food joints, pigs, Dollar Stores, motorcycles, pigs, and good old-fashioned Amerikan redneckery. The decidedly estranged yet complacent occupants of this proverbial small town go about their business like geriatrics in a casino . . . until their business is interrupted by a sinister gang of outsiders. Angry, slick-talking, and ultraviolent to the core, Samson Thataway and the Fuming Garcias commit art-for-art’s-sake in the form of hideous, unmotivated serial killings. When an unsuspecting everyman’s wife is murdered by the throng, it is up to Felix Soandso to avenge her death and return Dreamfield to its natural state of absurdity.

"A bludgeoning celluloid rush of language and ideas served from an action-painter's bucket of fluorescent spatter, Peckinpah is an incendiary gem and very probably the most extraordinary new novel you will read this year." —ALAN MOORE, author of Watchmen and V for Vendetta

"This book takes the idea of generic chaos and ramps it up, presenting a very funny and extremely violent mix of more genres, sub-genres, styles and cycles than you can shake a very sharp, bloody stick at." —IAN COOPER, auhor of Cultographies: Bring Me the Head of Alfredo Garcia

"D. Harlan Wilson's latest romp of a book, Peckinpah: An Ultravoilent Romance, proves that Wilson is either a genius or a madman, in all likelihood a crazed hybrid of both. A book that will delight Wilson's fans and mortally shock the unintiated." —ERIC MILES WILLIAMSON, author of Welcome to Oakland and East Bay Grease

"Peckinpah is so much more than a tribute to legendary cinematic director, Sam Peckinpah—it stands on its own as a unique work of art. The narrative purposely shifts voice, changes pace, hits the reader with rapid-fire snorts of ultraviolence and absurdity. At times it comes across as social commentary, warning us of the dangers of our fascination with violence. At other times, Wilson seems to lay on the violence so thick as though it were some therapeutic way of purging our craving for violence through repulsion. No matter the angle, Wilson succeeds in presenting this dark, tragic comedy that takes place in a world where the soap opera As the World Turns has been re-titled The World has Turned to Celluloid as though we were watching ourselves via spliced celluloid edited by a crazed nihilistic loner. The rummy writing style compliments the whacked out content in this brainy masterpiece." —DARK RECESSES

"Wilson's surreal view of a midwestern town called Dreamfield features the author's trademark prose which goes from violent to hysterical to bizarre—sometimes within the same sentence—all the while leaving behind witty commentary and observances on the rural lifestyle." —HORROR FICTION REVIEW

"Wilson presents the story in rapid-fire bursts of images in a literary equivalent of the meth addict MTV style of movie editing. There are moments of absolute brilliance to be found here. The usually overwrought wordplay occasionally reaches levels of the sublime." —HORROR NEWS

"Peckinpah is written with the frenetic pace of a schizoid-savant cranked on dexedrine driving an alcohol-fueled funny car across the Nevada salt flats while attempting to make a collage out of pornography, InTouch Magazine and stills from 30 years of ultraviolent horror and western films. This short burst of excess teems with sensual text that drips like the sweat of the back of a pervert in a Bangkok whorehouse. Words are strung together like the infinite mass of billboards that run and dot the highways and by-ways of America and we pass them in picoseconds hardly absorbing much more than a greasy smile across the lips of a buxom young co-ed. For Wilson, it’s A-more-ica. A place of filth and dollar stores and '8 lb. bowel movements.' In the end, the book is an acid-soaked ride through America’s filthy billboard mass consumption heartlands on the back of a souped up chainsaw. I would highly recommend it to anyone interested in literature on the edge, taking up space usually left for drunken angry desperate filmmakers of the late 1970s and early 80s." —BLUNT FORCE BEATING

"A frighteningly talented cultural theorist and writer, D. Harlan Wilson's latest novel, Peckinpah: An Ultraviolent Romance, is a gore-shock Kafkaesque rampage that clips along like Peckinpah’s trademark editing—alternately slow and fast—and will likely thrill fans of Peckinpah and those who have never heard of him alike." —THE PEDESTAL MAGAZINE

"Wilson weaves words into a brutal tapestry, creating a presence that will remain with you long after you stop reading. An existential love letter to Sam Peckinpah. Strange. Erratic. Captivating." —NIGHTBLADE MAGAZINE

"You know that scene in A Clockwork Orange where they have Alex strapped down for 'treatment' and he's forced, unblinking, to witness a barrage of horror and violence that is projected before him while the music of Beethoven blares in the background? This book is like that—in a good way." —SHOCK TOTEM