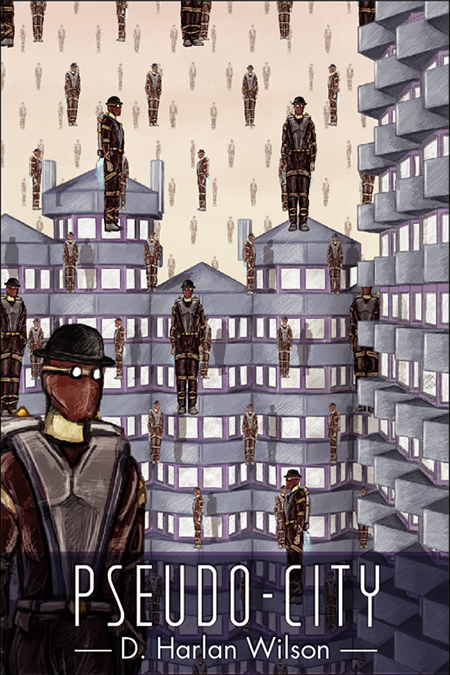 In Pseudofolliculitis City, nothing is as it seems and everything is as it should be. Today's forecast calls for extreme confrontation, with sandwich flurries and the threat of handlebar mustaches to the west. By turns absurd and surreal, dark and challenging, Pseudo-City exposes what waits in the bathroom stall, under the manhole cover and in the corporate boardroom, all in a way that can only be described as scathingly irreal.

"These intermeshed parables of madness and disjunction are funny the way that fever-dream of the naked fetuses squirming silently on a sidewalk you had last night is funny—when you think back on it sometime around noon today. At the brain stem of this impressive, relentless, heterologic schizopolis crouches a reptilian complex that would make Kafka, Burroughs, Bataille, and Leyner grin in recognition and admiration." —LANCE OLSEN, author of Nietzsche's Kisses and Architectures of Possibility

"Wilson delivers the surreal like no other writer working today, and Pseudo-City is an ingenious subversion—the sort of book that has the power to change your entire perception of the everyday world." —MICHAEL A. ARNZEN, author of Grave Markings and 100 Jolts

"Pseudo-City is a wonderful ride on the wild side, filled with biting political, social and religious commentary. It touches on the insanity of urban life in general and of the individual in particular, and does so in an often disturbing or silly way that keeps the reader coming back for more. Each tale is a gem worth savoring." —SF READER

"Wilson writes hard and witty. Readers who appreciate William S. Burrough and Laurence Sterne will find things to cackle at in these cyberpunky skunkyfunky fictions." —OUTSIDE LEFT