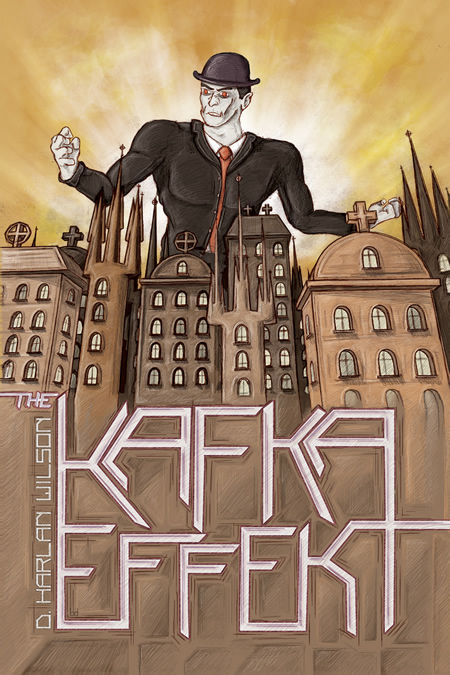 D. Harlan Wilson's debut book is a collection of 44 stories that was among the original enclave of fiction spurring the Bizarro movement in literature at the turn of the twenty-first century. According to the U.K. magazine Dazed & Confused, Bizarro authors are "the bastard sons of William Burroughs and Dr. Seuss, picking up where the cyberpunks left off," and The Kafka Effekt is a hallmark of this formation, which continues to grow and generate interest from authors and readers. Irreal, intelligent, funny and scatological, these stories turn reality inside out and expose it as a grotesque, nightmarish machine.

The Kafka Effekt includes the story "The Cocktail Party," which was adapted into a short, rotoscoped film. Directed by Brandon Duncan, the film won multiple awards and was an Official Selection at Comic-Con in 2007.

"D. Harlan Wilson has built a strange body of work. For most emerging writers that statement might be a kiss of death, but not for him. Wilson's intelligence and razor wit separate his writing from the ignorant vulgarity that too often passes for originality in today's liturature. In The Kafka Effekt, strangeness becomes a weapon. These stories are masterpieces of the absurd, both darkly funny and tragic. Wilson leads his readers through a surreal world with each one. And though he is far from the first author to do that, Wilson's skill in maintaining the delicate balance between chaos and meaning is what makes his writing enjoyable." —WAYSTATION REVIEW

"This collection, simply stated, encouraged me to use parts of my brain that I don’t think I’ve used since my teenage years. It reopens the mind to the discussion of existence while encouraging and entertaining the profound powers of the imagination. I mean this as the highest compliment to D. Harlan Wilson when I say that, in The Kafka Effekt, he shows himself to be a Dr. Seuss for adults. He is clearly encouraging us to push to new levels of thought and imagination—only in this case the Hat is in the Cat." —WILDCLOWN CHRONICLE

"Many of these stories are not really stories at all but rather sketches, and often cartoonish ones at that—think of the Mad Hatter plucking colorful tids and bits from an acid-tripping animator’s skull. The writing is rife with literary allusions and manages to establish its own repertoire of symbols although, per their Kafkaesque leanings, those symbols often remain opaque. If you’re open to the gleeful tweaking of literary conventions, D. Harlan Wilson’s The Kafka Effekt should satisfy like a box full of literary candy." —SF READER

"These stories read like the vivisection of the (in)human imagination. Peeling back the blister of perception, Wilson's characters breath, suffer, and live in dimensions of experience outside reality or fantasy. With uncompromising gusto, Wilson combines hallucinatory vision with concrete imagery, using words as a surgeon wields a scalpel to challenge the expectations of his audience. Although traces of Kafka and Strindberg resonate in the writing, never is Wilson's voice less than original as he carves holes in the frail 'good fabric' of logic. Rather than take an expected situation and strip it of its rationality, Wilson uses empathetic characters and vivid detail to illustrate the inherent absurdity already woven into the very core of existence. With a sophisticated and painfully honest style, he makes dark miracles and surreal revelations appear more substantial (and acceptable) than the 'normal' conventions of logic that he turns inside-out. Comedic and dark, compelling and intelligent, these fictions blur borderlands between thought and action, appearance and substance. Reality is exposed as a fine thread unraveling along the frayed ends of our troubled perception by characters whose transformations and absurd predicaments remind us uncomfortably or our own. Neither realism nor fantasy, this collection of posmodernist storytelling unrepentantly dares the reader to shadowdance between both extremes. In Wilson's apt hands, it's a trip worth taking." —WILLIAM P. SIMMONS, author of Becoming October and By Reason of Darkness

"D. Harlan Wilson is a mad visionary whose prose delves deeply into the subconscious. His imagination has no boundaries; his plots are like dreams and hallucinations under an acid reign. The Kafka Effekt serves as a portal to another state of mind—a fresh exit for those looking to escape the world as we know it." —SHANE STALEY, author of Burnt Offerings and The Cleansing