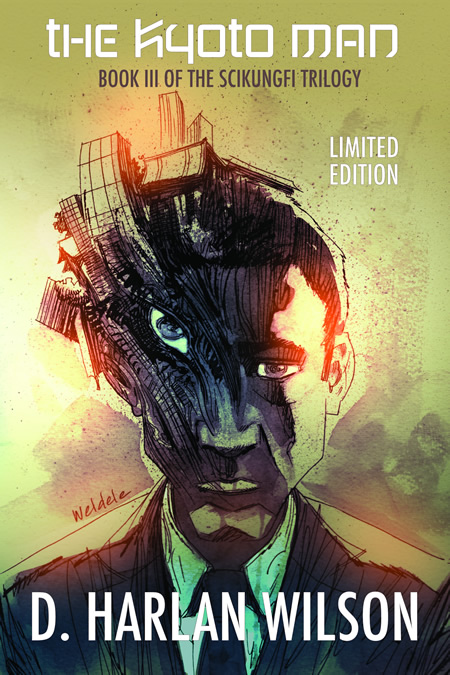 In the wake of the Stick Figure War, civilization lapsed into obscurity. Fallout ravaged the fabric of space and time. History digested reality and reality exhumed the future as survivors tried and failed to create a new beginning.

Amid the chaos, one man experiences a terminal affliction, a revolution of the self: the chronic transformation into the city of Kyoto, Japan. Each transformation further plunges the world into darkness, but he’s helpless against the lethal clockwork of his body, his psyche, his mindscreens . . . and nothing, not even Fate itself, can stop him from becoming God.

In the third and final installment of the Scikungfi trilogy after Dr. Identity and Codename Prague, acclaimed author D. Harlan Wilson composes a narrative grindhouse that combines elements of science fiction and horror with pop culture and literary theory. Erudite, ultraviolent, and riotously satirical, The Kyoto Man reminds us how, at every turn, reality is shaped by the forces that destroy it.

This signed hardcover edition of The Kyoto Man has a custom dust jacket designed by Brett Weldele and contains bonus, formerly unpublished material including outtakes and “The Bushido Chapter.”

"Not only philosophical and analytic reflection can be found hiding out in SF but even the work of revaluation and reinvention of artistic genres and styles. Against the yawning horizon of contemporary narrative, D. Harlan Wilson turns up the vertical contrast of poetic prose. I was invited by my students to visit, as the one it takes to know another one, his laboratory of endopsychic science fiction. Following the deferral of my resistance to the proposed transference of recognition value, I finally did enter. But what took me by surprise was not as much the visualizable elements of the fictional world/word or its intellectual properties—served up on a splatter—as the exploration of poetic style carried forward, to my mind, from a recent repressed past of invention. The Scikungfi trilogy is our continuity shot wit Ezra Pound's The Cantos." —LAURENCE A. RICKELS, author of Germany: A Science Fiction and Nazi Psychoanalysis

"D. Harlan Wilson writes with the crazed precision of a futuristic war machine gone rogue. He is devastatingly good." —LAVIE TIDHAR, author of Osama and The Violent Century

"D. Harlan Wilson's Scikungfi trilogy explodes pulp science fiction into new galaxies of frenzied prose that paints the imploding future as a funhouse of pop culture and avant-garde literature. The Kyoto Man goes a dimension or so further, mixing fractured narratives of SF with Hollywood pop into a postmodern scene that out-Burroughses Burroughs and makes Kerouac's trips seem square." —DOUGLASS KELLNER, author of The Postmodern Turn and Media Spectacle

"A dark, trippy tale that pays homage to the past masters." —FRED OLEN RAY, director of Hollywood Chainsaw Hookers and Bikini Frankenstein

"Believe the hype this time. D. Harlan Wilson has more talent than you can throw an axe at." —WILL ELIOTT, author of The Pilo Family Circus and Nightfall

"Wilson’s prose is playful, violent, and humorous, but it also shows he’s one of those few authors who can make words do his bidding. If metafiction has suffered the risk of turning into a silly gimmick at the hands of untalented authors, D. Harlan Wilson has rescued it and elevated it to an art form. The Kyoto Man is proof that storytelling can be outstanding even when everything readers know is removed from the equation." —THE COFFIN FACTORY

"Kudos to you, Wilson. You have made meta-fiction play with itself and observed it as from the back of a classroom snickering, while it orgasms and digests itself into oblivion." —UR CHICAGO

"D. Harlan Wilson’s The Kyoto Man is a funhouse mirror-shattering novel that switches form and function as fast and often as its protagonist. Understanding is slippery, and Wilson, who once declared that plot was his mortal enemy, doesn’t make it simple for his readers, but half the fun is the ride, and the author’s absolute mastery of form and experimentation with the schizophrenic way in which the story is told make this book well worth the price of admission." —INSTRUCTIONS FOR THE ASSEMBLY OF GOD(S)

"I'm not sure if Wilson is a damn genius or a raging lunatic, but no matter which it is, one thing is certain: he can write a novel that will make you think." —HORROR TALK

"The techno-absurdist futurity of The Kyoto Man and the Scikungi trilogy manifests an infrequent, if nonexistent, phenomenon, notwithstanding narratives that have been deemed as such by educational and publishing institutions for their own dubious ends: high literary science fiction." —LOFTON GITT, author of The Pale Escarpment and Moon Over Yesterday