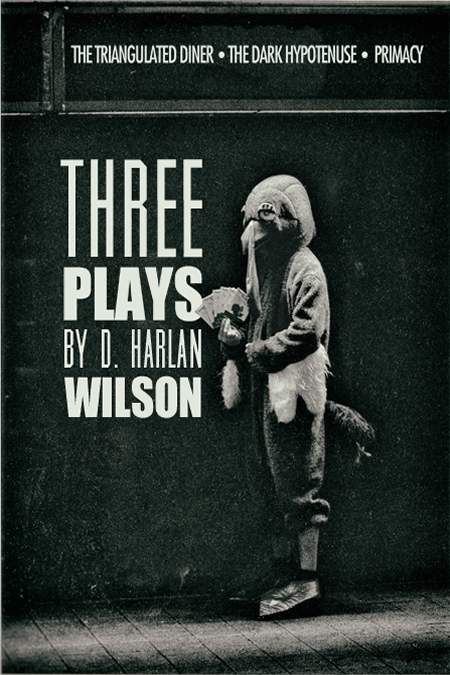 Over the last two decades, D. Harlan Wilson has established himself as a writer of avant-garde fiction that has been called many names, ranging from literary, speculative and postmodern to irreal, bizarro, absurdist and “splatterschtick.” Some say he defies categorization and is a genre unto himself. In his first book of plays, Wilson subverts traditional forms of stagecraft, unmans the helm of narrative, and exposes the nightmares that distinguish everyday life in urban and suburban America. Channeling Samuel Beckett and Jon Fosse in one scene, Russell Edson and Alfred Jarry in the next, he subjects actors as much as audiences and readers to mindless violence and torrid irrationality under the auspices of literary theory, psychoanalysis, philosophy and science.

These plays belong more to an ultramodern zoo than a modern-day theater. In “The Triangulated Diner,” a Camero fishtails across the stage and runs over actors as jungle animals attack the audience. An elephant is hung onstage by a crane for stomping on the head of an abusive handler in “The Dark Hypotenuse.” “Primacy” finds a husband and wife struggling to write the perfect obituary, ideally one that includes wuxia death matches and flying holy men . . .

This collection describes a microcosm that is at once uncanny and familiar, weird and ordinary, comedic and horrific. Wilson puts the human condition on trial and challenges us to view theatrics in a different light.

Read Primacy in issue 58 of The Cafe Irreal.

"Wilson is the Loki of modern American letters, the spiritual love child of Rosa Luxemburg and Groucho Marx, taking the piss out of readers through a glorious embrace of the absurd." —SAN DIEGO BOOK REVIEW

"D. Harlan Wilson's venture into playwriting is a huge success. All three of these plays are hilarious, memorable, absurd, and just plain fun to read." —CULTURED VULTURES

"I usually hate elevator pitches (unless of course I'm the one pitching them), but these three plays are essentially the pomosexual lovechildren of a triploid situation involving Rice, Beckett, and Ionesco, godfathered/mothered by their spiritual descendants, babysat by the ghost of Freud, and molested by the desensitizingly ultraviolent uncles of late capitalism. And yet, despite this contemporary disadvantage, somehow they manage to affect us just the same, resisting the urge to wallow too much in their window dressings and unabashedly indulging in the same sense of necessary, futile, tragicomic humanity their parents would have been proud of. Bravo." —ARTHUR GRAHAM, author of Editorial and The Rooster Republic Years

"D. Harlan Wilson’s sharp edged drama has held a fractured mirror up to nature and converted safe reality into the dreamlike world of the irreal." —B.E. TURNER, author of The Road Goes On and The Carousel

"These plays are a search for meaning and insight into the ways the means can revolt against the ends that add to my view of Wilson as a genuinely irreal writer. He builds worlds from words in a robust and sometimes frenetic way that is surprisingly humorous and often quite humane." —THE CAFE IRREAL